Day 3 , 6th August ,began early with a pickup from Tirant hotel from our guide “Star” . After a halfway stop at a large gift store we continued on our 4 hour journey to Halong Bay . We boarded the tender at the Paloma cruise office to make the trip out to the luxury Paloma “junk” . It was raining which actually made the weather a bit more comfortable . The staff on the tender held out umbrellas for us as we were boarding . Shortly we were aboard our vessel and shown to our luxury cabin . The bay is amazing with more than 2000 islands , which mainly have steep rocky shores , with the water dropping away to a depth of over 10 metres, and the occasional sandy beach. After drinks and lunch we set anchor near one of the floating villages . Lily and I took the kayaking option around the village whilst Ingrid and Annette boarded one of the sampan boats . After a circuit of the village , and for us a circuit under a rock bridge , we landed at the pearl farm and were shown how the “seed” is put into the oysters. 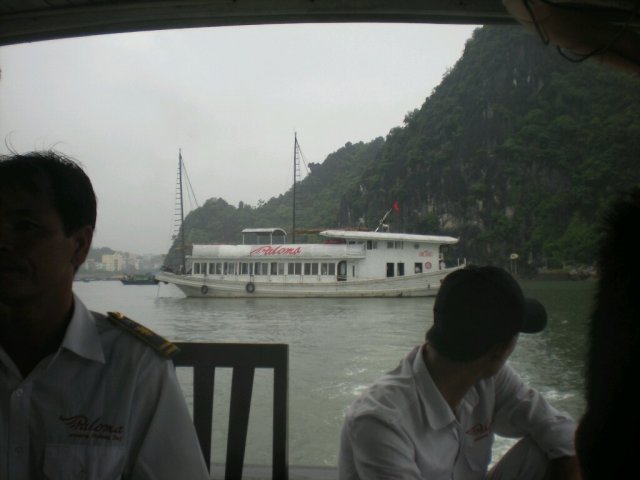 After reboarding the mother ship it was time for some swimming in the warm waters of the bay – I mean really warm like a bath. After drinks and a sumptuous dinner we were invited to have a go at squid fishing. The equipment was fairly rudimentary , a light , a 1.5 metre pole with a short length of line and a small jig attached . Our guide Star seemed rather surprised when I jagged a squid and it filled the water with ink , though failed to land it. The tourists all gave up early but after landing two small(in my eyes) squid I was eagerly joined by the staff ! Though they were unable to match my catch.( Star later told me it was the off season for squid)