Day 5 -August 8th
We were in for another early start in Hue with are tour guide Tam arriving at 0715. This time it was a motorcycle tour of the district with us riding as pillion passengers – not something I have done before. Clearly we were very trusting ,letting these strangers ride us through the disorganised Vietnam traffic chaos. First stop was the Citadel and the Emperor’s Forbidden Purple City . This was all built in the early 1800’s over about 30 years . Its perimeter walls measure 11km . It is so large that the Americans built a landing strip inside it .The North Vietnamese later took it over and housed 45000 troops here and the Americans bombed it so it suffered heavy damages. It is all gradually being restored.It was the residence of the King till 1945 when the King of the day left for France at the start of the first IndoChina war.
After this we went to vist the largest Pagoda in Hue and then we boarded a small boat for a tour of the Perfume River .Aboard of course there was a Vietnamese girl selling here wares of fabric paintings and clothes and drinks -fortunately. As we got off the boat on our way back to the bikes – I stepped on what I thought were pavers -except they were some guy’s bricks drying in the sun ; at which he suddenly arose from his hammock ! Fortunately Tam was able to soothe the waters.
From there it was on to see Te Ducs tomb .Interestingly he was never buried in his tomb which the French found out when they raided it . Those with knowledge of his burial grounds were then either beheaded or died mysterious deaths( arsenic poisoning I believe ) !
After an off road tour through one of the cemeteries we arrived at a Buddhist nunnery where we were served a traditional Buddhist/Vegan lunch ( yum yum) .
We were then taken back to the Asia Hotel ,lead by our amusing guide Tam .
In the afternoon we were met by another tour guide , Quoc – pronounced Wuk – for our drive to Hoi An.
Halfway along we stopped in Da Nang at Marble mountain – where they produce goods carved from he local marble.
Finally we arrived in Hoi An at the Golden Sands – paradise by the sea ! 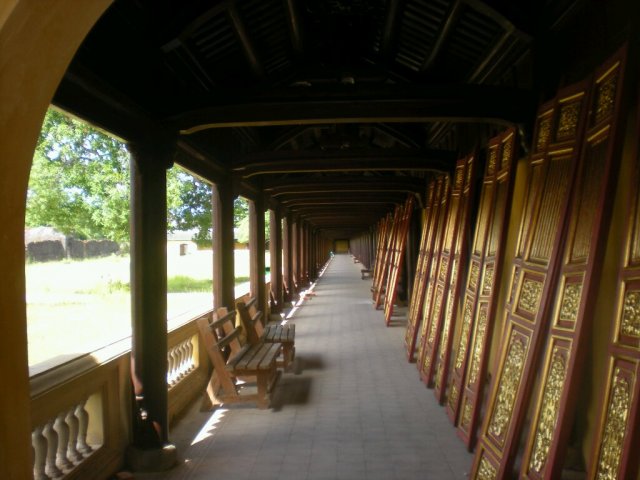