We were in the air for 15 hours from Melbourne to LA direct. Good roomy seats in Quantas Economy but tiring for me cause I hadn’t slept for 2 days prior with all the excitment etc, Rick slept well on the plane but I was mainly watching movies. We caught the bus from the LAX airport to Venice Beach and stayed at Foghorn Harbour  Inn at Marina Del Ray but got off the bus 2km too early so had to carry our bags in the heat was about 25 degrees. The canals of the marina are enormous with lots of boats moored, thats why an Italian who must have developed the area called it Venice Beach. We couldn’t get into our room cause we arrived Sunday  8am  so dropped our bags and wondered over to the infamous Venice Beach which was a bit quiet at that time of day just joggers and people walking their dogs, but  later on it got very busy with tourists and various people  selling art craft etc We had Mexican for lunch which Shannon said was great all over America and it was pretty good and went to a fish restaurant Charter House in Marina Del Ray and that was brilliant. The next day we took the bus into  Hollywood  and as soon as we got of the bus this old  guy sold us a ticket to go on a tour of the famous Hollywood homes which was interesting  but 1.5 hours was enough. We walked along Hollywood Boulevard with all the star names on the pavement . 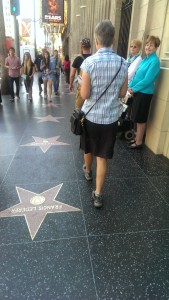