Circa December 2000 while in New Zealand on a tennis tour with my son I bought a book by John Acland on endurance training. The principles in the book helped me train for longer triathlons,which before I had never contemplated, and in it were inspiring photos of the Coast2Coast. In 2011 I bought a kayak and struggled through a multisport race from Marysville to Melbourne and the Coast2Coast again entered my brain but I put it on the backburner.

In 2016 my son James moved to Christchurch. Early 2017 , Wayne who knew I was doing multisport events, mentioned possibly doing the Coast2Coast . Lily and I visited Christchurch on the day the the 2017 event finished. The scene was set , Wayne would enter also , a 12 month journey began.

Firstly you have to get a grade 2 certificate in white water kayaking; I hadn’t seen a rapid for 40 years and they were tiny ones on the Yarra river. For me the only good option was with experienced NZ guides so I went back to NZ and completed that with Topsport kayaking . I also had the opportunity to reccie the run course with 2nd place athlete in the race Sam Manson. Next a support crew ; I got a commitment from Lily and James and signed up for the 2018 2 day event.

Training continued ad hoc , and my on call commitments meant I never got to any whitewater in Australia and had little time in the alps. November saw us back in New Zealand and I did a trip down the Waimakariri gorge with Topsport. The river was flowing at 150 cumics and was scary . I swam twice and got spun into eddies and wondered how I would get down the river without a guide. I took another opportunity to go over goat’s pass with Sam.

A week out from the race we were back in New Zealand and I again went down the Gorge with Topsport. The flow was high again. I got past the rock gardens without issue but again swam twice. The second capsize was particularly enlightening. While upside down I couldn’t find the tag to realease the sprayskirt. The water was so clear and everything looked so pretty but I came to a realization that I ought to get out if wanted to breathe again. I pushed my knee up through the sprayskirt and it came off. I was now floating rapidly down the Gorge and if not for Chris Stagg directing me to swim into an eddy behind a large rock I suspect I would have continued in the water for a lot longer. After Chris had helped prevent my impending hypothermia and fixing my pedal position in the kayak I got the rest of the way without incident .

The next few days I got my compulsory run gear and bike checks done , had to leave my bike overnight , WTF due to a recent upgrade it was brand new! We picked up an Apollo motorhome and drove to Kumara racecourse in time for registration and briefing ; James drove on his own and joined us later that night.

After getting dropped at transition and racking the bike I walked down to the start with the throng chatting to various people. I met Wayne on the beach and went down and touched the water. I met up with various training buddies I’d met including Jaci Sarah and Mark and wished them luck . Byron must have been near the front where he would be for the entire race. My intention was to run 4:40-45 pace to get in the right bunch which was essentially what I did despite being bunched in after the scramble up the rocks. For the first 30k of the ride I was in bunches from 6 to 30 and never did a turn – who wants an old man at the front anyway. After that I was swapping turns in a group of 6 though I noted there were 10 more hangers on when we entered the transiton at Aickens. Transition is different to triathlon. You run past the crowd of assistants and your support crew have to spot you. The crew were well organized and transition was quick. I ran past the entrants for the Mountain Run and under the timing arch that signals the run start in 1:59 – (2.2 +55 +2 transitons under 2 hours gotta be happy ). The first 3 km of the run is relatively flat then you run past the Deception footbridge and cross through the river the first of around 30 water crossings and get the first taste of running on the rocks . Soon I discover I can’t tolerate the Clif bars I’ve brought and find I am slowing sometimes to a walk. I trip and fall onto the rocks hitting my knee and am helped up by some guys amongst whom is Wayne who checks I’m ok before he continues on. The terrain continues with a mixture of rocks, water and steep single track and I go back past Wayne while he is shedding a layer due to the heat. Soon we are into the boulders and it’s single file traffic . Scramble over boulders walk through water scramble over boulders walk through water…..

The sight of goat hut is a relief . I get out my ham and cheese sandwich as I get my gear checked . The view from the top and down the Mingha Valley is spectacular. I am able to start running again on the more forgiving terrain. After a while when you think you’re nearly down the other side there is what looks like a vertical rock wall in front of you that they call Dudley’s knob. Then it is downhill to the Bealey river. After crossing the river the terrain is flat but impossibly rocky and I take another fall and the tall guy behind me hauls me to my feet. Just after you hear familiar voices you climb up to the grassed area and down to the Day 1 finish. I meet with Lily and James and Wayne’s family and we wait for Wayne to come through. Then it is an early night as the support crew have a really early start the next day. Support Crew , now this is tough.

Drive to Mt White bridge, leaving before 5 am, get kayak off Topsport prepare kayak take kayak and all compulsory gear to scrutineers put kayak and gear at startline. When competitor arrives assist with gear assist into kayak check rudder etc is working. Pick up bike drive to Gorge bridge transition put bike on rack have change of gear and nutrition ready. When competitor arrives assist where allowed . After competitor leaves pick up bike and gear and drive to New Brighton find a park and you might get to the finish before your competitor. Phew!

The first ride started in groups of 10 according to the previous days finish time. I was off at 0751. Simple enough ride ,15 k with 480m of climbing and 610m descending . I rolled with the front 3 or 4 all the way pulling them uphills and drafting on the big guys downhill.

At Mt White James met me across the bridge I racked the bike and James led me to the kayak. Finally getting in and making sure the pedal position was right and rudder worked I was underway. Passed a lot of people in the braided section and was paddling well. Got through the rock gardens without issue. The second serious bluff corner I cut too narrow and the eddy threatened to capsize me , I braced , stayed upright but the force tore the paddle from my hands. The paddle span temptingly vertical for a while in a boil as I tried to paddle to it with my hands . The jetboat graciously offered to retrieve the paddle for me but they had wait for a lot of traffic to pass before they could get to it . Now I’m going back past people I’d passed before. The gorge was great and I generally handled it OK then at about 45 k I had relaxed too much and went in on a boil. While on the bank emptying my boat I waved to Wayne as he went past. Underway again I chatted with the people again as I went past and had an encounter with a rockwall and a willow tree. I arrived at the Gorge bridge and the volunteers had to haul me out of the kayak . James met me at the water’s edge and guided me up the hill to transition, though I could barely walk.

Once on the bike the legs seemed to spin Ok. There was a small hill to climb and then it was into the headwind to Christchurch. Thought is was going to be a long day when a small group came past moving along at 38kph. After the turn right some guy organised the bunch into a rolling group which got larger and larger as we passed more riders . At the turn into Christchurch a group of 5 of us was away from the bunch and swapped turns the rest of the way . Just then had to run up the sandy steps to the finish . Had a beer or two in the recovery are and waited just a short while for Wayne to finish. Then sat in the crowd with James and Lil and watched Sam Clark finish in the one day event.

My support crew did a sterling job.

Next year , maybe the tandem event with James. 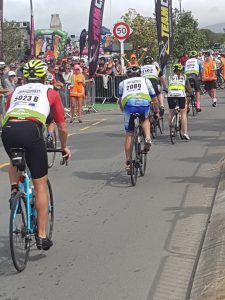