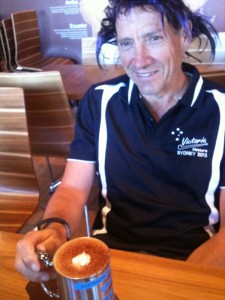 The hockey has continued , unfortunately with a loss to WA country 1-0 , probably a wake up call , as we were a bit too cocky after winning our first three games . In the return game against WA it was hard fought and resulted in 1-1 draw . With NSW beating Qld this leaves us in second spot with a return games against WA country tonight and WA plays NSW and results will determine who plays who in the semi-finals .
Lily and I have continued our walking on the rests days , a ferry trip to Watson’s Bay followed by a walk to Bondi . Yesterday we took things a bit easier going to the movies after a ferry ride from Olympic Park to Darling Harbour.

There are a couple of traditions in these tournaments with the competitors meeting fro a drink in the tent afterwards and giving a gift to the opposition’s best player and their manager. Our additional thing is to award the Dinger cup which is awarded to the player receiving the most votes from his fellow players after the game though noone can win it twice . In addition the hair is awarded for a foolish event , sort of . I was fortunate enough to receive both after the WA game. The holder of the hair passes it on after the next game. The Dinger cup must remain full at all times , and whilst alcohol is the usual content it is no t mandatory and this morning a cappuccino was the obvious choice . In addition the cup must be dinged by the hold which is why you will notice that the handle is now bent !

Arrived at Sydney Airport for National Masters Hockey tournament and boarded the train for Bankstown. Thought we must have been somewhere in Asia every school kid that got on the train for a while was of Asian descent which soon changed to Middle Eastern as we got further west . Went to the Thai place next to the accommodation for dinner which was Halal and alcohol free and very pleasant.
Following day we bought a weekly train ticket at Bankstown which gives access to the whole rail network bus network and ferries for $61 per week. Took the train to Cronulla and we’re we’d landed in Europe somewhere( till we got to the surf beach anyway). Walked around the peninsula near Cronulla as far as we could on the track next to the water . One difference here you really notice is the deep water openings into bays and harbours as distinct from the bars back on the South Coast. Walked back along the streets to Cronulla once we in the area of Gunamatta bay where the houses take up the beachfront.
After getting a train back to Sydney we took a tour of the Opera house and managed to score a discounted near front row seat to view the Sydney Symphony Orchestra for a performance of a Chopin piano Concerto and Wagner’s ring adventure.It was really great to see and hear very good music , with 80 musicians completely in rhythm and tune ( a stark contrast to the only 2 piece band playing on our walk back to the rail station. )

After continental breakfast at the Pinnacle Guesthouse we headed off to complete 2 walks , Manly to the Spit bridge followed by Spit to the Harbour bridge.We started with our coats on the weather being still cold from yesterdays low , but the rain was holding off and we were soon stripping off before we had got to the end of Manly Cove. We must have missed a turn ( even tough the sign said spit ) so ended up with a longish walk through suburbia to Clontarf . After walking along the beach here I was soon recognizing Middle Harbour and the Yacht Clubs from my visit here in my early adolescence then finally the spit bridge came into view. Walking through the bush near here it was hard to believe we were still in the suburbs. We then negotiated the steep streets of Middle Harbour . The rest of the walk was a combination of bush tracks and suburban streets. All steps being rather steep ! Finally we arrived at Kiribilli on the North side of the bridge and at lunch at one of the Cafes . We walked across the bridge and talked about where we would stay our last night . First stop was the Shangri La near Circular Quay . The going rate was 275 for a standard room 290 for an Opera House view and 390 for a grand harbour view room . Anyway after negotiation we

ended up with a Grand Harbour View room and complimentary bubbly for 260 ! – Talk about walking in style !! The weather has turned ! 110 km/h winds in Sydney. Wouldn’t want to take the Manly ferry today . Walked as far as the museum/gallery and Oceanworld and back to the Pinnacle Guesthouse in Manly – a quaint place in an original colonial building . Spent a couple of hours at Oceanworld just chilling  . Had a great meal the previous night at a place called Garfish – saw our meal served up on the bigscreen beaming live from the kitchen then our meal arrived !  Such a hard life guess I now better find somewhere to eat tonight.